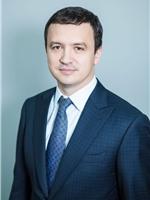 Ihor Petrashko, Minister for Development of Economy, Trade and Agriculture of Ukraine

Received an Honors Bachelor of Management degree at Lviv Polytechnic National University in 1996, and graduated from that university in 1997 with an Economist Engineer’s degree.

Studied in the United Kingdom under an exchange program, and underwent an internship at Charles University in Prague, Czech Republic. In 2001, received an MBA degree at Vanderbilt University Business School, United States.

In 2002, received a second university degree in law at Ivan Franko National University of Lviv.

Has over 20 years of experience in the field of economics, management and administration. Since 1996, has been working at major Ukrainian and international companies providing consulting and investment services.

In particular, he worked as a manager and partner at Ernst & Young in 2004-2007. Between 2007 and 2012, he worked as the head of investment and banking section and corporate accounts department at various banking institutions.

Since 2013, he worked as Deputy General Director at UkrLandFarming, an agricultural holding company.

On 17 March 2020, the Verkhovna Rada of Ukraine appointed Ihor Petrashko as the Minister for Development of Economy, Trade and Agriculture of Ukraine.